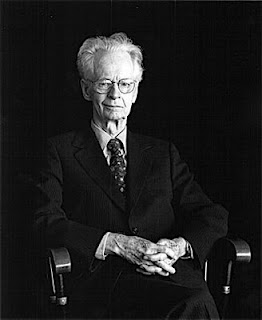 As an undergraduate psychology student I was trained in operant conditioning developed by behavioral psychologist B.F. Skinner of Harvard University. Skinner was interested in studying the effects that the environment played in shaping and maintaining behavior.

As it turned out, Skinner was also an amateur inventor and he developed an experimental chamber in the form of a small metal box with a glass panel on one side so he could observe what went on inside the box. He also placed a small mechanical lever inside the box that protruded into the chamber from the wall of the box opposite the front glass panel . He then trained rats to press the lever with their paw which closed an electrical circuit resulting in the automatic delivery of a food pellet to the rat through a small opening below the lever. Whenever the rat pressed the lever, he received a small pellet of food for his effort.

He soon discovered that this mechanical device which came to be known as the Skinner Box allowed him to study how the environmental effects of behaviorally produced consequences shaped and maintained behavior. That is, he was able to study how engaging in a behavior (lever pressing) produced an environmental effect (the delivery of food) which in turn increased the probability that the animal would repeat a similar behavior in the future under these experimentally arranged conditions.

Skinner also invented another piece of hardware called a cumulative recorder which automatically displayed on a continuous roll of paper each bar press the rat made on the lever as well as the delivery of each pellet of food over time.

Through the invention and employment of the Skinner Box and cumulative recorder, Skinner discovered that he could condition rats to engage in orderly sequences of lever pressing behavior depending on how he programmed the delivery of the food pellets. For example, if he programmed the Skinner Box to deliver a food pellet each time the rat pressed the lever this schedule of delivering food pellets produced a continuous high rate of lever pressing. When these responses were printed on the cumulative recorder, he was able to observe this orderly pattern of behavior. He then systematically manipulated the way the food pellets were scheduled to follow the rat's lever pressing and observed different rates of responding depending on how he scheduled the delivery of food pellets.

Next, he duplicated they ways in which he manipulated the delivery of food to discover that specific ways of programming the lever to produce food replicated specific patterns of behavior. In effect, he used the patterns of responding observed on the cumulative recorder as a type of software to program the Skinner Box to produce schedule specific conditioned responses.

As each rat learned to replicate these programmed patterns of responding, the rat was physically conditioned to respond in predetermined ways. He in effect, taught the rats to learn how each schedule of predetermined consequences affected their behavior.

Once the rat had learned how to respond in ways characteristic of each schedule, Skinner in effect produced a permanent change in the rat's brains. These characteristic learned patterns of responding were now established as a form of "wetware" programming each animal's responses.

From these simple experiments and countless replications of them across numerous other species including humans, an entirely new way of understanding environmental effects on behavior emerged.

It is this simple model of behavior/environment relationships that is the very basis of the Buddhist teaching of anatman or "no self." It demonstrates the Buddhist doctrine of dependent arising. There is no ghost in the machine causing it to behave ... there is only the mutually interpenetrating and co-dependent arising of conditions stretching as far back as the Big Bang all the way up to this present moment. Viewed from this perspective, our moment-to-moment behavior is the arising of all the interpenetrating conditions that exist everywhere at all time for all time. In fact, time itself is nothing more than a way of measuring change ... the constant ebb and flow of conditions.

After all, didn't the Buddha teach that the five skandas (bundles) that make up the "self" are nothing more than the coming together of conditions? Skinner, it turns out, proved in a very limited scientific way what the Buddha knew 2500 years earlier.