Where the streets have no name 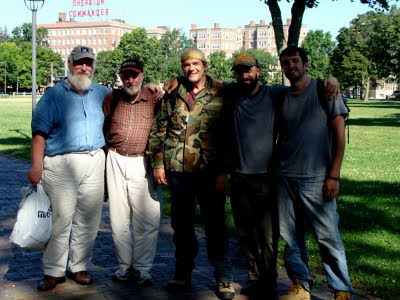 Over the weekend of July 17, 18, & 19 a poet, a zen priest, an industrial designer, a mental health professional and a manager of a soup kitchen took to the streets of Boston to bear witness to its homeless.

We only took the clothes on our back, no money, no bedding, no tooth brush, no jewelry, no credit cards, & no desire to do anything but aimlessly meander for three days throughout the city of Boston. What did we find there? Parts of ourselves that we did not know existed.

Like the tears that came to us when we overheard a little eight year old boy ask a homeless women if her cat was homeless too and she replied, "No, he is not homeless because he is with me."

Like the fear we experienced when we woke up at 3am to discover a crack addict and his "girlfriend" shooting up six feet from our sleeping spot at Trinity Church.

Like the frustration and sadness that came to us when we were unable to connect with a young Iraqi war veteran, just home from the war, who we found in Copley Square at 6am drinking freely from a quart of vodka and crying over a friend who has AIDS.

Like the feeling of belonging when a street woman in her late forties named Nancy, who has been on the streets since she was 13, welcomed us to the Harvard Square street scene and showed us where to sleep that night and where we could get free pizza at 11pm from a nearby pizza parlor. It is their practice to put their unsold pizza out on the streets for the homeless when they finally close for the night.

Like the indifference we felt from the majority of people who walked past us, not even willing to look at us, let alone give us the spare change we requested as part of our begging practice.

We ate in the soup kitchens, shelters and churches, we slept on the ground, walked for miles on end, pissed in the bushes and scrounged enough money to split a coffee between the five of us.

We went down on the streets to bear witness to our own lives in this experience - moment-to-moment. Nothing more/nothing less.

What we found in these most impoverished circumstances is an unexpected world of riches: pain, fear, joy, intimacy, boredom, frustration, inspiration, connection and compassion. Compassion for ourselves and all God's children who inhabit the streets with no names.
Posted by Unknown at 8:18 PM 1 comment: